Yesterday, another piece of my past went away.  Well, it didn’t go away…it’s still there.  I just don’t have access to it anymore.

The house in Arizona that my grandparents owned, then by my aunt, has been sold as part of my aunt’s estate.  It took a year’s worth of renovating to bring it to market, but this week, the title will be signed.  My cousin Julie, who took charge of doing getting the renovations done and did a fabulous job, and I did a final walkthrough of it last night, and left the keys there for the new owners, whoever they will be.

This was the house that was the basis of the house in To Hell With Fate; or, Why The Best Valentine’s Gifts Come From Mini-Marts that hosted the family funeral.  It played host to me and my family and many, many others over the last 30 or so years.  The retirement community Sun City, where it stands, was surrounded by farms when my grandparents moved in.  Now, the very ungridlike streets act as a roadblock for the suburban neighborhoods that have engulfed it.  Other than my actual homes over the years, this building was the one that I visited more than any other.  Now days, it’s known more for llamas than anything else.

The walkthrough was unusual for a couple of reasons.  First, the house was empty.  No furniture, no scratchy couch, no old television, no grand piano or harp, or knick-knacks.  All gone, distributed to family or sold as part of the estate.  It’s almost alien when a house you know isn’t filled with things.  The other reason, the renovations that my cousin did, along with another cousin, Andy, acting as the contractor, so changed the look and feel of the house that much of the interior was brand new.  New floors, new rugs, new paint, new drapes, and noticeably even a new ceiling in the kitchen.  And yet, I still had memories rushing by as I walked around. 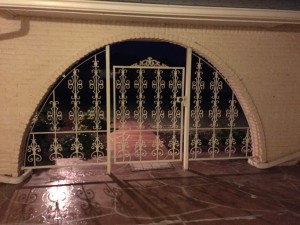 The front gate and patio.  I never understood this part of the house.  The iron gate, painted white, obviously provided a little separation from whomever might come to the door.  But the inside of it had no latch; it also required a key to enter.  As did the front door on the other side.  If guests were leaving, someone had to come press the buzzer to let them out as they left.  If you were leaving and locked the basic latch of the door behind you, but forgot your key…well, hell, you were in deep doggy doo-doo.  That part didn’t seem safe in a retirement community and for those who were likely to live there.  Luckily, to my knowledge, there were never any incidents.  But then, anyone who visited and stayed pretty much just went out of their way to use the garage to get in or out, as opposed to the gate. 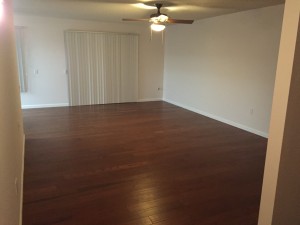 The living room.  That wall on the right always had a couch against it, and though I always had a guest bed available to me, often I’d prefer that couch, no matter how itchy it was or how much I’d outgrown it.  Recliners or other chairs would sit on either side, all angled to where the television was, on the wall to the left.  A coffee table invariably sat between the couch and the TV, offering very unergonomic eating perches, and endangering shins.  New TVs were put in from time to time, but they were out of date long before any of their installations in this house, and rarely worked well.  The rest of that wall was lined with shelves filled by knicks and knacks and curiosities and souvenirs from around the world.  This wasn’t the formal room for entertaining…but it’s where more time was spent than any other. 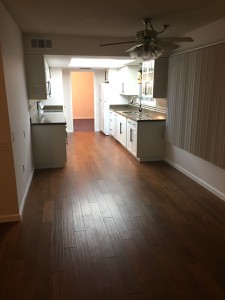 The kitchen needed work more than any other room.  That amazing ceiling?  Done by Andy, it was never there with my aunt or grandparents.  Almost everything in this room is new…and it really needed it. 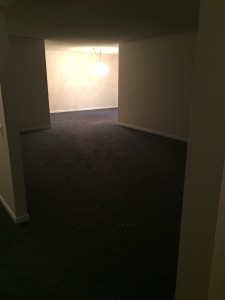 The family room.  This room was always weird…it was the largest in the house, opening to the dining room at the far end, but it had no built in lights and damned if we ever knew which plug the light switch activated. Almost by sheer fact of that alone, not much time was spent here unless the family was spilling out of the other rooms.  There were couches and chairs, and pianos and harps over the years.  When Christmas was here, this was the home of the tree.  Or, if you wanted to get away, it would be in here (a fact treasured by my cousin Julie’s cat, Tabitha.  However, if the adults wanted the kids out of their hair, video games or other things would be set up in this room to ward the children away. 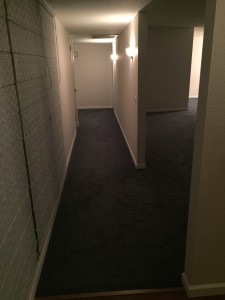 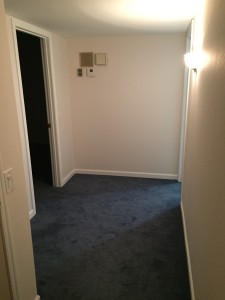 The hallway.  This view is from the front door.  If you walk straight in, you go to the living room, but turn left and you see this hallway.  The opening to the family room is on the right, but then it’s a long walk (relatively) to the guest wing.  Two bedrooms and a full bath would be down here.  That nook at the end is where Joseph tells some of his story to Samantha and Jessie, on a long-gone hope chest that sat there.  I never knew what was in it, but yeesh, was it heavy! 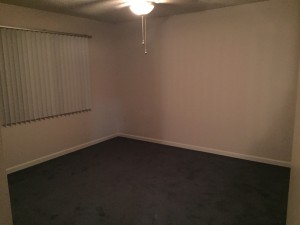 This is one of the two guest bedrooms, the one that was usually mine.  That window opens up to the walled patio, so there, more than any other room, you knew when someone was arriving.  This is the room where Natasha and Jackson are staying in the book. 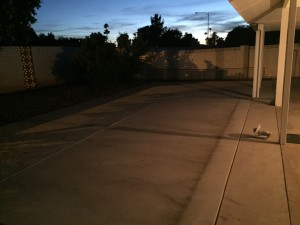 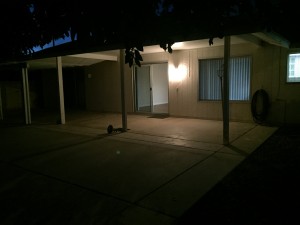 The back yard.  Liberal use of the word “yard”.  In this nighttime shot, you can’t see, but where the concrete end, rocks begin.  It would get hot back here, but my grandfather kept roses and citrus plants, which grandma would regularly use for juice whenever visitors arrived.  This is a weird backyard in Sun City, in that it’s private.  Many other yards just open up to other houses’ yards, engendering a sense of community, I assume.  Or it annoys the OCD, very proprietary people who might move in. 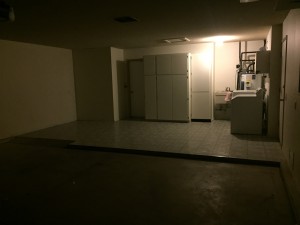 Finally, the garage.  I’ve known garages that are meant to have room for people to do things other than park cars, but this is the only one I’d ever seen where the areas were separated out.  The two-inch or so ledge for the utilities was lined with a linoleum that made it feel like an entirely different room than the concrete floored car area.  Grandpa had a workbench against the wall to the right, though I never saw him use it for anything other than smoking his pipe.  The left wall used to have cabinets where grandpa kept things to entertain his grandchildren, none of which would work anymore.

There are other parts, but none of them were as important to me.  The master bedroom was unofficially off limits when my grandparents were there; it was officially off limits with my aunt there.  I felt awkward whenever I was in that room, even as the co-trustee of the estate.  The dining room was rarely used when I was an adult, as a kid, I’d be sent to eat elsewhere.  And, well, you don’t need to see the bathrooms.

I’m gonna miss that house.  I hadn’t spent much time in it the last few years until my aunt passed, but that’s life.  I rarely had the time to get away.  I don’t need access to the building to access my memories, but there will be no more strolls down the hallways or the rooms.  No more wondering if there were any ghosts hiding in it.  No more nights on the couch.  Just a book that took its memories and shared it with the world.

I hope the new owners fill it with good new memories.  And the ghosts don’t bother them too much.

Yes, the lights were really doing this when we were closing up…but it was probably just a short on a dimmer switch.