My Thoughts While Watching The New Star Wars Trailer

However, I’m in full-blown Star Wars fanboy mode.  In addition to first-world problems (Fandango started selling early!  I had to get tickets at a non-desirable location for opening night!), I’ve overwatched the new trailer, and since no one has done a review (yet)…here’s my thoughts.

Specifically, these are my thoughts as I watched the trailer, unfiltered.  While all of this is pure speculation, and some just for the humor of it, I’ll just add SPOILER WARNINGS, just in case.

LENS FLARE!  You knew J.J. Abrams couldn’t not do it, even if just a little bit.

As someone who works in tech, the thought of sand and what I have to imagine is a small space between BB-8’s soccer ball body and head seems like a rather undesirable combination.

Less about the screencap than the order of the images in the video.  This trailer starts with a set of character intros…which is interesting in many ways.  But mostly, it starts with one.  The Lucasfilm graphic doesn’t show up until after Rey’s scene.  In my memory (which, could be wrong, correct me if it is), I’ve never seen a Star Wars trailer in the internet age NOT start with the Lucasfilm vanity card.  And the fact that Rey gets the initial treatment is curious.  She is not a Jedi, or at least hasn’t revealed herself to be one yet.

Okay, taking a bit of knowledge both from this trailer and previous ones.  Finn appears to have been a Stormtrooper.  He appears to be shot down (by whom?) and crash on Jakku in his Stormtrooper armor, which I assume leads to this.

Point #2: He has a cool leather jacket with him.  I wouldn’t think Stormtroopers have their own clothes, even for non-duty moments, much less a place to stash them in a TIE fighter.

LENS FLA oh, it’s old already.  But seriously, what is that red thing streaking across the window of the apparent bridge of his Star Destroyer?  It’s too slow to be a laser blast.  It’s apparently streaking “upward” (perspectively), which, even in a space universe, I would expect not to be a ship breaking apart as it crashes into a planet.  They aren’t in an atmosphere for that to happen anyway, though I’d imagine some filmmakers would ignore that detail.

You know who didn’t get an intro in this trailer?  Poe Dameron, the top X-Wing pilot.  Instead, we get to see him being tortured, it seems.  This omission is also curious because the current comic mini-series Star Wars: Shattered Empire seems to have a subtle tie-in to him.  (I’ll avoid the spoilers on this one.)

How many Star Destroyers crashed into Jakku?  We saw one in a previous trailer that was nose down, this is nose up!  How many did the Imperial Navy have?

Now this is interesting.  The implied conversation here is about Jedis and the Force and how that led to the downfall of the Empire…But they’re viewed as myths?  Is it possible for the Jedi to have become a myth just, what, 40+ years after Order 66?

Here’s a big reveal.  We know that’s Kylo Ren in the middle, because of that lightsaber with ridiculous cross guards.  But…who are all the rest of those guys?  There’s no uniformity with those masks (it’s easier to see in video).  None appear outwardly to be Stormtroopers, though I see one that looks vaguely Mandalorean.

We keep believing this image is of Luke, because of the robot hand and his faithful R2-D2.  But by this juxtaposition, apparently he’s on some planet being raided by Stormtroopers.  Or…is he with them?

Another non-intro-worthy character, Captain Phasma.  I get the feeling she deserves to be one!  But…no.

No, but seriously, does Chewie ever need to wear the cone of shame when he’s recovering?

Apparently, any droid can be promoted to Astromech co-pilot.

• STOP GIVING DONALD TRUMP IDEAS ABOUT THE BORDER (even if the climate looks more like the Alaska-Canada border).

• Wait, is this icy planet the Death Star/Starkiller shown in the poster?  Clearly that trench isn’t big enough…does that mean it opens, bad-Earthquake-Movie-Style to the size we see in the poster?  That’s going to stretch my believability a bit, J.J.

• Maybe this time it is a moon.

Did that X-Wing just shoot to disarm a Stormtrooper without killing him???

I’m already sick of movies and TV shows using the “Hero can disarm a villain by shooting his gun” trope when it’s horribly unrealistic to have any level of that accuracy, much less the likely ricochet that could injure someone.  Doing it at a jet flying and probably at least Mach 1?  HELL NO.

(And for those who would say that the Stormtrooper is dead, I’d point out that X-Wing lasers can cut through metal and destroy other spaceships, and a laser bolt doesn’t penetrate this guy?  I call bull.)

Apparently, Kylo Ren’s mask isn’t as needed as Vader’s was.  However, his face must be even uglier than the Emperor’s considering the look on Finn’s face at him.

Either that, or this is the dialogue:

Kylo: “Finn, I am your father/brother/sister/former housekeeper.”

(Also, I hope he reads that dialogue like the 12th doctor.)

Okay, okay, one more, more seriously possibly Spoiler-ish, me looking at this trailer as a writer.  There’s this scene:

Start with the weird looks.  Finn looks surprised by this exchange, mildly.  Poe seems to be giving him, at least, a bro-like shove, saying “Good luck” or “Force be whatever with you”.  Okay…So again, why is this curious?

Well, first…the forest planet seems to be a big fight scene.  Perhaps the final big fight scene.  Why?  First, Leia is giving Han a tearful hug there.  Second, Han, Chewie and Finn are all there together, as seen in the screenshot where I noticed Chewie is injured.  Hell, Chewie being injured probably isn’t a random thing, so there’s at least something that happened before it.  So this is at the end of the movie.

So, why is this important?

Well, from this trailer, we know Poe is captured at some point in the film and tortured.  We know Finn is a former Stormtrooper who had a crisis in faith about what he’s doing (from his intro scene in this trailer).

Was Finn’s crisis of faith from watching Poe get tortured???

If so, does Poe not know Finn was there watching the torture?  (Considering Stormtrooper masks, quite probably.)

Finally, one final tidbit that’s bothering me about all these people who are doing the reviews, at least that I’ve seen, even if it’s not trailer connected.  (SPOILER ALERT FOR THIS ESPECIALLY)

Let’s look at the poster. 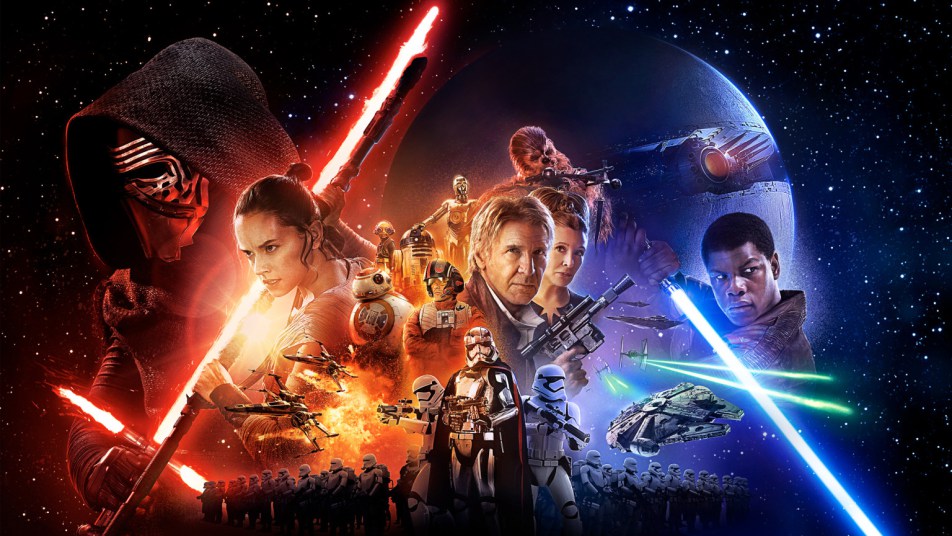 Every in-depth poster review I’ve seen has looked at that figure next to R2 and above BB-8 and called him an unknown alien figure.

NO HE’S NOT!  We know exactly who he is.  He’s Teedo.  And he’s been in released images from Lucas, and in a trailer before.

First of all, remember this scene from Teaser #2?  As many pointed out, a lightsaber being handed from a (then-)unknown alien hand to a female hand (possibly Rey)?

How do we know his name?

IT’S ON THE DAMNED STAR WARS WEBSITE.  Not the Wookiepedia (but there, too), but the official one!  He became known from an image they released that also shows, apparently, how Rey meets BB-8 from the “Brutish Scavenger” riding a Luggabeast. 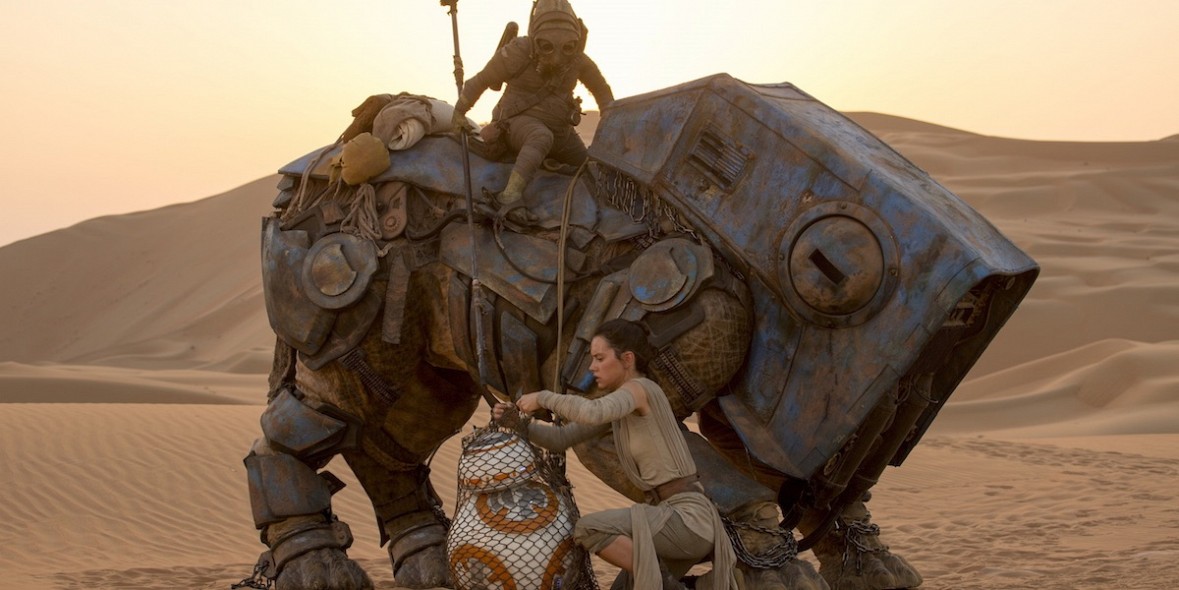 Come on, guys, I can’t be the only one who’s put those things together.

Okay, that’s it.  I hope people enjoyed this read, and are looking forward to this movie as I am, perhaps with the same amount of sarcasm.