A Webcomic For SF Giants Fans 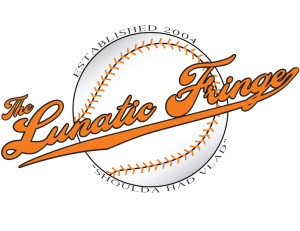 The Lunatic Fringe is a webcomic about San Francisco Giants fans, and the team that they love.  Started as Spring Training opened in 2011, the comic immediately began following a fanbase of sudden and unexpected champions and seeing how that can affect fans and how they root for their team.

The Lunatic Fringe continues to explore the nature of fans, and all that sports can offer to the world.  The comic touches on all Bay Area sports, whether it be the 49ers playoff runs, the Raiders basement runs, the Athletics’ continually futile attempts to go to  San Jose, or the Sharks’ consistent disappointments.  Whether it’s the World Baseball Classic or the Super Bowl, the comic comments on it all.

Drawn by bay area artist Rog Hernandez, and written by Kevin J. Cunningham, the Lunatic Fringe is one of the few baseball comics on the web.  It was honored in its first year of existence, being nominated and then becoming a finalist for the Best Local Comic award in SF Weekly’s 2011 Web Awards.

The Lunatic Fringe can be found online at http://www.sflunaticfringe.com, and collections will soon be available for sale in both ebook and print.