A Girl, A Clown, And A Cover

The whole Batgirl variant cover situation is now so radioactive on both sides, you shouldn’t go near it with a 10 foot Bat-Pole. 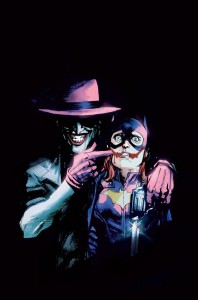 To fully understand this image, one needs a little context, so here goes for those of you who don’t have a comics history to fall back on.

Let’s start with this.  The young lady in the image is Batgirl, whose real identity is Barbara Gordon.  She is the daughter (or niece, depending on the timeline) of Batman’s friend and ally, Police Commissioner James Gordon, though without his knowledge.  And Barbara Gordon has had a very interesting career.

This image refers to a comic titled The Killing Joke, a standalone story published by Alan Moore.  It actually provides one of the many origin stories told for the Joker, but the moment that everyone remembers is when The Joker shoots and paralyzes Barbara, stripping her, taking nude photos of her while she bleeds.  It does not show anything else, but many have taken the implication.  He does it in front of Jim Gordon, while kidnapping him and trying to drive him insane to prove a point.

There’s a bit of irony here: The Joker had no idea that Barbara was Batgirl.  In fact, she had recently retired from crime-fighting.  He comes to shoot and torture the Gordons.  So her injury did not come as a result of heroic duties.

The Barbara Gordon character was one of the major examples of the phenomenon that’s come to be known as “Women in Refrigerators,” which refers to another female character who was used as a plot device by having violence happen to her, to make the male character move ahead.

That was what was intended, as Alan Moore had no other plans for the character.  But as can happen in comics, other writers saw an opportunity, and, while still paralyzed, Barbara Gordon became a new character: Oracle.  She used her intelligence and knowledge of computers to become a key character in her comic universe, serving as a communications hub, a wealth of knowledge and an electronic hero in the days the internet was just becoming a thing.  Her stories occasionally came back to the trauma that occurred to her, but that was part of her hero’s journey: overcoming the senseless violence that occurred to her.  She became a hugely popular character, with her own series, including an ill-fated television show.

And then, DC Comics “retconned” most of its comic universe.  Retconning is where you take what has been part of the story for years (the canon, as it’s called), and say “that never happened.”  I’m not even going to try and explain the plot devices used to make this happen…it’s the kind of stuff that makes people who hate comics feel justified.  But, they did that.

In the new stories, the events of “The Killing Joke” happened and Barbara had been paralyzed (and even still has her wheelchair and handicapped-accessible van), but she got better to the point she could be Batgirl again.  Oracle never existed.  DC Comics has barely tried to explain this, though the act is not unprecedented in the Batman comics.

This retcon was controversial, because it essentially took away one of the greatest hero journeys in modern comics.  However, Oracle had also been the focal point of criticism that, if the DC universe routinely resurrects and heals its male protagonists, why not this female protagonist who had a pretty similar injury to one of her peers that got healed?

Either way, the new Batgirl books have taken a new style, trying to appeal to new female readers, with a new look and creative team, saying that she “wants the opportunity to have some fun and live the life of a young, single girl in the city, so she packs up and moves to Burnside, the cool, trendy borough of Gotham, to focus on grad school.”

Okay, so that’s Batgirl, and the context of this image.  Joker appears in a Hawaiian shirt and hat that he wore for the act of violence, a completely unique look for him that is only brought back to reference that event.

The cover has since been cancelled, after a social media movements, and then threats of violence being issued against those who complained about the cover (really?  Why do people do that stupid shit?).  According to both DC and the artist, it was the artist’s choice to pull the comic, with the blessing of the comic’s writer. So, there’s no discussion left about potential action…that’s been decided.

So, is this cover in bad taste?

I…don’t know.  To be honest, for me it truly depends on the book itself.  We often say the “Don’t judge a book by its cover” cliche so much and never actually about books, but this cover should get judged by the book it is trying to get people to read.  Not all covers, particularly variants, depict things that actually happen in the book, and if that is the case, then yes, I don’t think it’s right for this cover to bring up the reference out of nowhere.

But if the book does contain the Joker (and it very well might, the Joker has been in a long storyline in all the bat books recently), and Barbara is confronting him directly, then I absolutely think that this cover is relevant and not out of line.

Look, Barbara Gordon is a hero, and heroes do get put into the line of danger.  How many times have we seen heroes of all kinds, male or female, normal human or superhuman, restrained and with threats of violence.  Even on covers on a fairly regular basis.  It’s ironic because, as noted before, this act of violence occurred without the pretext of Barbara’s heroic endeavors.

But then, there’s this response:

Batgirl is not a hero on that cover. She’s a victim. She’s terrified. She’s being physically restrained. It looks like a snuff film.

“In 2015, if edgy and subversive comes at the expensive of somebody’s basic human dignity, we rightly call it out as old BS dressed as new BS

“You know what I call that? Progress.

“I should note that I love The Killing Joke.

“It came out at a time when we were failing to grapple with some of the very dark psychological implications of the superhero genre.

“So it served a valuable artistic purpose and shattered some old stereotypes. I don’t think the takeaway should be “torture pr0n is cool.””

(G. Willow Wilson is the writer of Ms. Marvel, and her twitter feed had this as a series of comments.  I’ve copied and pasted for loading’s sake.  The point is, she’s in the business and is aware of the context, and is a very respectable voice.)

Barbara’s most compelling heroic journey has always been this growth from a random act of violence.  Even as a guy reading, I’ve been fascinated with how she has grown from what she was dealt, and how it continues to echo with her.  Comics have often tried to find small flaws in characters to make the personable or relatable (Storm’s ridiculously crippling claustrophobia is one), but they’re often very cliché, unrealistic and cheesy.  Barbara’s echoing PTSD has made her a compelling and relatable character.  I can’t say that as someone whose had the experience of actual abuse, violence or otherwise visited upon them, so I’ll defer to that audience whether it’s as compelling for them…but it is compelling to me, as someone who often gets generalized into the white, techy, “dude-bro” category.

And that journey is so incredibly meta, because her violence was truly a random act, a plot device not meant to be part of her story…because her story wasn’t being considered.  But then someone saw that was wrong, and began writing her story.  And that’s why her Refrigerator moment gets overlooked…because even if it started as a plot device for someone else, born out of that tragedy was not the motivation of a man, it was the motivation of her own.

And that’s amazing.  Comics as a medium has a real problem with female representation.  From the very real Women in Refrigerators phenomenon, to unrealistic female leads, there aren’t a lot of great ones out there.  Look at Supergirl.  Every now and then there’s a promising story…and then there’s reboot, and new artist, and hijacks by crossover stories, and a new TV show that has nothing to do with the current comic character (likely meaning the comic character will bend to match the TV one)…and it’s awful.  Wonder Woman is a bland story that never feels like it takes hold, and no one has been able to unlock her character potential.  Powergirl is…well, she is.

But Barbara…she’s always been compelling.  I loved her character in Batgirl: Year One, which took place before the tragedy (timeline wise, it was published long after).  She is without a doubt the best female character in comics, and she is adored, both by fans and creators.

But that brings me back to this cover: I think it’s an incredibly important image of her.  She is helpless, she is crying…but that’s how many people feel after having traumas.  That image never happened in her past…she wasn’t wearing the costume, she wasn’t restrained.  But what if (and I don’t want to speak for the author here) that is how she sees herself.  Helpless.  Overpowered.  Doomed.  Her journey, her overcoming that, and having to always overcome the image in her mind, is her most compelling heroic attribute.  And that is something that, knowing friends who have been attacked or worse, I feel confident can inspire her readers, and her fans.

But it’s the cover to a story…a story where, I’m assuming, she prevails.  That image is not a standalone thought…it’s the start of what she needs to overcome.

It is a shocking image.  Not overly shocking, in my very jaded mind.  It’s evocative.

And the best heroes are.