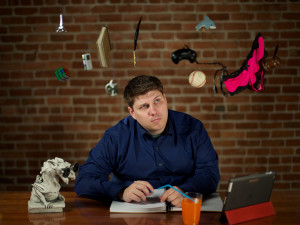 After writing To Hell With Fate, Kevin J. Cunningham had to admit he was a writer.  For real, this time.

Kevin was inspired to write this story as he grew up, and found how our expectations for what will be our happy endings changed as we got older.  The idea of romance, and what we want, is an ever-changing subjective topic as we get older.  This is true not only in the overwhelming body known as ‘society’ but also among each of ourselves individually.  Whether or not it gets better or more realistic, or both, as we get older is still open for discussion.

Before undertaking this novel, most of Kevin’s writing career was spent as a sports journalist.  From 2002 through 2011, Kevin was a writer for San Francisco Dugout Online Magazine, commenting on Major League Baseball’s San Francisco Giants and particularly their minor league system of players.  Kevin wrote both stories and updates, as well as taking photos and conducting interviews with players and coaches.  In 2007, Kevin also took over editor duties for the site until it suspended operations in 2011.

Starting in 2011, Kevin began writing a webcomic about Giants fans, The Lunatic Fringe, working with artist Rog Hernandez.  In less than a year, The Lunatic Fringe was nominated as one of the best local online comics by SF Weekly.  The comic continues to update three times a week, every Monday, Wednesday and Friday, and follows the travails of Giants fans as their beloved team has its highs and lows.

Kevin would like to say that his influences are authors like Neil Gaiman and Terry Pratchett, filmmakers like Steven Spielberg and David Fincher, musical artists like Evanesence and Bon Jovi, television shows like Firefly andLost, and the vision and management style of Steve Jobs, but the real influences on his art are his friends, family, and the souls that he runs into during his daily adventures and many travels.

Kevin’s much neglected twitter feed can be found @BruteSentiment.  He’d be more active on it if he knew people were listening.  He’s not one of those writers who writes just for himself (he hopes).  At this time, he does not have a public Facebook page nor a personal website.  If you’d like to see more of his work, you are encouraged to follow @sflunaticfringe for his webcomic and the Facebook page for The Lunatic Fringe.  There’s also a Google+ page if you feel like a rebel.  The first year collection of The Lunatic Fringe can be found on Lulu.com, and will soon be available as an iBook exclusively for the iPad in the iTunes store.

Read more about Kevin and his thoughts on writing at this wonderful interview by author Alys B. Cohen.  Be warned, frank language inside!

The author can be contacted here.  Please be kind, don’t feed the animals, and don’t do anything he would do.