Young Adults and the Adults Who Read Them 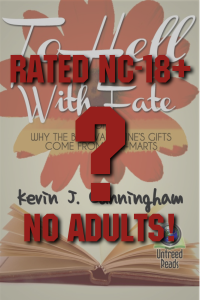 So, apparently it’s a discussion now about whether or not adults should, or should be proud of, or anything else involving Young Adult literature.

I’m a little late to this party, but a fairly recent article on slate.com posed these two comments:

“…it can be hard to remember that once upon a time, an adult might have felt embarrassed to be caught reading the novel…Not because it is bad—it isn’t—but because it was written for teenagers.”

“Adults should feel embarrassed about reading literature written for children.”

There’s a lot more to this.  Even though the author, one Ruth Graham, does discard the low-hanging fruit of Twilight, and even mentions one of the books that caught my eye and imagination when I was young, The Westing Game, it’s hard to find much of an argument in her article.  It falls under the quality that young adult books are written to be satisfying, and adult life rarely is satisfying or simple or uncritical.

That’s all pretty unquantifiable.  I’m a baseball guy, so I love stats and measurements, but even I’d give up on finding an algorithm for satisfaction.  There’s a debate here about whether or not literature should challenge a reader with ambiguity, or provide an escape from a dreary life with something simple and happy.  Actually, there’s no debate: the answer is yes.

There’s even the debatable switch of terminology that leads to a stuffy condescension by equating teenagers with children.  I’m 36 and 359 days old and I bristle at that.  But I’ll let someone half my age take that up.

But I’d like to take issue with one part of the author’s statements:

How do you, Miss Graham, know who I wrote my book for?

Now don’t get me wrong…my book as of right now, is marketed towards young adults.  That’s a pretty loose definition…the marketing is pretty much the extent of being classified as “Young Adult” by genre in bookstores.  But that has little to do with who I wrote it for.

When I started writing my book, To Hell With Fate, all I knew was that it was a story I want to tell.  In fact, there were stories I had been telling out loud to friends for a while, that my novel eventually tied together.  I told it to my friends, mostly peers.  Over the years, my peers’ ages changed…but they were always stories for my peers.

Writing it down was one of the hardest and most challenging things I’ve had to do…only exceeded by the writing of my yet-to-come second novel.  But what came pretty close was categorizing it.

A book needs to be categorized.  How else does a library or a bookstore or especially an electronic bookstore know what to do with it?  It’s a sad truth, but it happens.

I won’t lie, when I first thought about it, the thought of categorizing my book as Young Adult was a bit off-putting.  I knew that branding a book with that immediately sets some expectations about what’s in it, some prejudices.  The kind that Miss Ruth Graham brought out.

There was New Adult, supposedly aimed at 16-30 year-olds or somewhat about that.  New Adult is pretty much a genre that is the literary equivalent of calling a comic book a graphic novel.  It’s there really to make the reader feel less shamed by certain critics and societal prejudices.  But it’s also a genre that doesn’t exist in most of the major electronic book stores.  Hell, Apple’s iBooks store doesn’t even have “Young Adult,” just children’s.  So there’s that.

The other option, however, was Literary Fiction.  My editor, bless him, suggested that my book was strong enough for that.  But, then, that was a genre that was also bound by many expectations and prejudices.  It’s stuffy.  It’s complicated, and worse, it’s proud of that.  It looks down on its reader.  At least, that’s the assumption many have.

My book is a story.  That’s all it is.  I wrote it for my peers.  My peers include my father and the teens I occasionally help out at work (or work with).  And, of course, everything and everyone in-between.

First of all, I thought very much about who I most wanted to read it.  And I was torn.  People my age, I thought, would enjoy it, because it’s a bit of nostalgia.  It’s all about the way we remember young love rather than how we live it.  I thought that young people would identify with it, because I’d hope that they would identify with how I didn’t write it as simple, but as the many thoughts someone goes through thinking about when we think we’re in young love.  Because those thoughts are not simple, and are not patronizing, and don’t always cause people who have grown up after those thoughts to roll their eyes to.

Maybe, because of that, my book does not fit Ruth Graham’s definition of Young Adult books.  Or it aspires to be, I’ll leave to reviewers who I’m sure are eagerly awaiting to review my book as to whether it succeeds.

But she’d never know that, because it’s listed as Young Adult.

Which it is listed as for the second reason.  I pretty much placed it there because I thought Young Adult would sell better.

But that really happened only because I had to pick something.

And if it comes down to it, I’d rather be classified with things that makes a reader think I’m not writing down to them, and rather writing to them because it might satisfy them, which is far different than make them happy.

My father is an age that would best be described as “should-be-retired,” and he’s about as intelligent a man as I know, who works in a complicated field, with what I’m sure are conflicting ideals and ethics, and has worked there long enough to survive many of those conflicts.