The Last Day of April

Not the character in the Lunatic Fringe comic strip April, but the real life dog that inspired her.  April wasn’t my dog, she was owned by my friend Robyn.  Last year, she was diagnosed with kidney failure, and on Saturday, she finally succumbed to it.

She was three weeks away from her sixth birthday.  Life is so unfair that she only got be a part of ours for such a short amount of time. 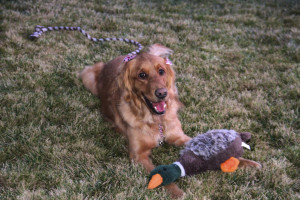 It may be weird to some people that one can get emotional over a dog, much less someone else’s, but April was something special. 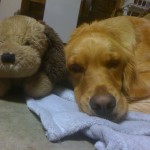 April and her stuffed dog.

She was the kind of dog who had a stuffed toy puppy that she brought with her, and when guests came to her house, she’d go get her puppy and make people say hello to it, too.

On a roadtrip, she’d poke her head between the front seats and give the driver a look that said everything you needed to know about finding the next rest stop.  (And it was funny watching her do a little pee dance until she found the right patch of grass.)

If you were in a room with her, she’d often position herself near a door so you couldn’t leave.  She even had another stuffed toy that she’d set up right in open doorways to guard the room.

And if you were leaving, she’d run over and sit down right at your feet, because she wouldn’t want you leave.

April idolized her mother, as much as a puppy could do with a human.  But for me, she was my Godpuppy (a title Robyn bestowed upon me), and I felt lucky to have had such a bond with her. 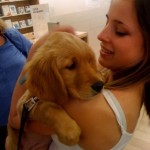 I fell in love with her, just as Robyn did, close to six years ago, when she came to the store where I and Robyn worked.  April was the runt of a litter had by one of my coworkers, but she was completely adorable as we all sat there on the sidewalk, and she waddled from one of us to another.  She was a 16-week old puppy, and the last of her litter to find a home.  It was only 2008.

April, however, did not fall in love with me right away.  I didn’t get to see her much as a puppy, and when she was a year old, her mom brought her over to try and get her to like me.  She just sat there next to me and growled as under her breath as she could get away with.  She did not like me.  So in 2009, I decided to make a playdate with her.  To get her out and social, maybe just social with me, I bought her and her mom tickets to the Dog Days of Summer game at AT&T Park.

I think she just wanted to be on the grass.

That day, a shy pup came out of her shell.  She got to take part in the parade, and out in the bleachers, had a lot of fun.  And she didn’t hate me anymore.  The experience led to the Dog Days storyline that took place in the first year of this comic, and made me April’s Godpappy, at least according to Robyn.  Instead of growling at me, whenever it was time for me to go home, she would plant herself at my feet, and glare at me. 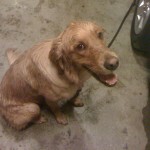 She could not be prouder of herself. Or wetter.

After that, April loved me.  She baptized me with her mischievous behavior during my first day dog-sitting her, when she stayed in my garage during the first rainy day where she’d otherwise have had to stay outside.  I was worried how she’d react to the rain.  Instead, she slipped from my grip and took me out on a 15-minute run in that rain, with me freaking out that I’d just lost Robyn’s dog.  When I finally got her (and me) back in that dry garage, she couldn’t have been prouder of herself.

April was everything you could hope a dog could be.  She was an amazing partner and friend to Robyn, and was there for her through more difficult times than you could ever imagine someone going through.  Robyn sometimes went through trials that were so ridiculous, they wouldn’t seem realistic if put into a book.  And April would never leave her mother’s side.  When I was helping her Mom to move out of an apartment, if I so much as made a step towards the car while holding April’s leash and Robyn wasn’t there, April would plop down and refuse to move. She would not leave her Mom behind, if it was within her power.

She also forgave me for singing Guns’N’Roses to her in the car.  That alone made her a doggy saint.

For all the sadness I’m feeling over this, I can’t help but feel for my friend Robyn.  For my friend, April was a companion, a soldier, a solace, a rock, and a friend.  She was her mother’s puppy, right down to a nervousness about going over bridges.  April was there for everything that Robyn went though, and I can’t imagine what she must be going through.  To her, I’d like to say again how much sympathy I feel for her, and let her know that I will be there, even if I could never come close to being as amazing as that one puppy.

I’ve decided that April, the character in the comic strip, will continue to appear.  It’s an appropriate tribute to a pet that had such an amazing influence on all our lives despite being there for such an unfairly short amount of time.  You’ll simply have to forgive me because at some point this season, you’ll be subject to an unreasonably sappy comic or three involving her.  I apologize in advance for that. 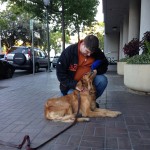 April with me that recent day.

A few months ago, I got to see April for the first time in over a year.  I knew she was sick, but the treatment was doing well.  She was still strong enough and energetic enough to pull her leash right out of her Mom’s hand.  And sure enough, when I began to walk back to my car, she got away from her mom and she plopped right down at my feet, and gave me that look she always did.

That’s the April I’ll always remember.  The loving dog with a heart of stubborn gold, who never wanted to see you go.  I didn’t get to spend a lot of time with her…life got in the way of hanging out, but from dog parks to AT&T Park, or just staying in and watching TV, it always made me smile to see her.

On Friday, I went to spend one more night with April.  She could barely move anymore, and Robyn said that she had badly moved all day.  But when she heard me, even if she wasn’t strong enough to move her head, her tail began to wag furiously, and her eyes lit up again.

I spent much of the night there with her and Robyn.  We sat there on the floor, and talked about television and politics and memories, many many memories while stroking April’s fur and helping her whenever she needed some water.  I haven’t sat still for that long since the last time I attended a 16-inning game.

But it seemed only right and fair that I sit there, for one night, at April’s feet.

Because I didn’t want her to go. 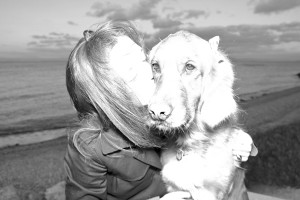